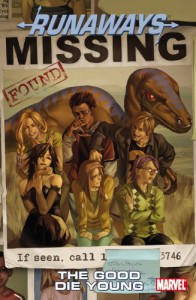 I read the first two books of this series last year and finally picked it back up.

This book wraps up the Pride arc with their parents. We learn what the Pride is and what they are planning. The Runaways decide to go after them and stop their plans. I enjoyed the finale and look forward to where the series goes ffrom here.

I remember over a year ago when it was announced that Marvel would be making a TV series with Joss Whedon, IGN had a list of 10 ideas they could run with. SHIELD was also listed and what they went with. Interestingly enough, many of the other ideas are part of the Netflix series. Runaways was also a suggestion and was when I first ran across it. After I finished Y: The Last Man I decided to start it. I hope they will choose to do a Runaways series at one point.